My first job after graduation with a basic engineering degree in Electronic Communications was as a Process Engineer at the National Semiconductor integrated circuit assembly plant in the Senawang Industrial Estate, Negeri Sembilan in March 1980, or 39 years ago and my starting pay back then was RM1,000 per month.

That semiconductor plant has since closed down during the economic recession of 1987 but by then I had moved on and was happily working as a computer service engineer with Rediffusion Malaya in Kuala Lumpur.

Anyway, with that RM1,000, I rented a single storey terrace house in Taman Marida for about RM140 per month, if I recall right, just five minutes drive away from my workplace. I also could afford to run a used car and pay for the frequent repairs, commute back to Kuala Lumpur to meet my parents every weekend along the Seremban Highway, enjoy a beer or two with friends or colleagues in the evenings.

A full meal for one person at a Mamak shop in Seremban cost around RM4.50, including rice, vegetables and a meat dish or two and a drink, which I thought was a bit pricey compared to the 1970s but definitely much less that what such a meal would cost today. Anyone living in Seremban today, can tell you what the price of a plate of rice and dishes in Mamak restaurants there cost today.

And the showroom price of a new 1,300cc car such as a Ford Escort, Datsun 120Y or Toyota Corolla cost around RM14,000, which could be paid off with a three-year car loan, though I would have had to put down one-third as a down payment from my own pocket.

The above prices of new Perodua cars are taken from En. Ismail's website below:-
https://www.keretaperodua.com/senarai-harga-perodua-2019-jom-tempah-perodua-baru/

Well in 2018, the minimum basic salary for a graduate is RM1,983, down from RM1,993 in 2010, according to the infographic below, courtesy of The Star, based on Bank Negara estimates in turn based upon salary figures by the Malaysian Employers federation . 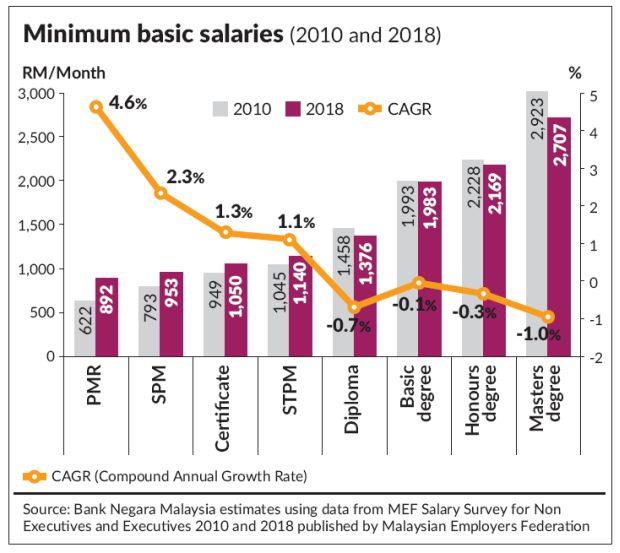 From the above, it's obvious that salaries have dropped for Malaysians higher up the skills chain, though as it's mentioned in The Star's article, this could be due to people with these higher qualifications having to accept jobs below their qualification level, not that there is any shame in this on their part but rather it's a shame on the government and policy makers that they are in this predicament.

I suppose, with an explosion in the number of private universities, some of which are more or less private graduate factories, Malaysia's employment scenario is flooded with a surplus of degree holders, hence it's an employers market and employers can depress salaries they pay, bearing in mind again, the purchasing power parity of salaries earned in 2010 and 2018 due to the higher cost of living in 2018 compared to 2010, so besides the numerical decline in salary quantum for diploma to masters degree holders between 2010 and 2018, there has been a further drop in the purchasing power of these salaries can pay for in 2018 compared to 2010.

Also, the above surely must be an "great encouragement" for Malaysian school leavers to pursue higher education to be able to "move up the skills chain to be relevant for jobs up the value chain".
So what "High Income Economy in 2020 (opps! postponed to 2024) were the folks at PEMANDU (Performance Management Delivery Unit) and former Prime Minister Dato' Seri Najib Tun Razak talking about back in October 2010?

The slides below are courtesy of Pemandu's Economic Transform Programme website, though I cannot find these slides anymore. Glad I had kept a downloaded copy. 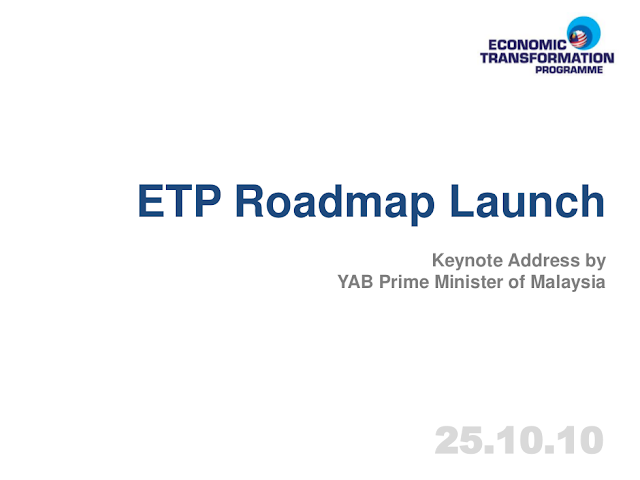 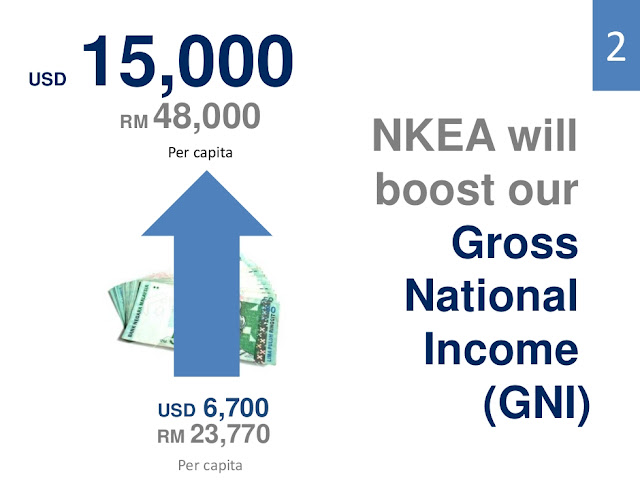 According to the slide above, Malaysia's Gross National Income per capita would be RM48,000 per annum or RM4,000 per month. I believe GNI per Capita is an average income figure for all Malaysians and with high levels of income disparity, it is possible that 70% of Malaysians would be earning less than the average of RM4,000 per month, not to mention the higher cost of living in 2020, compared to 2010 or 2009. 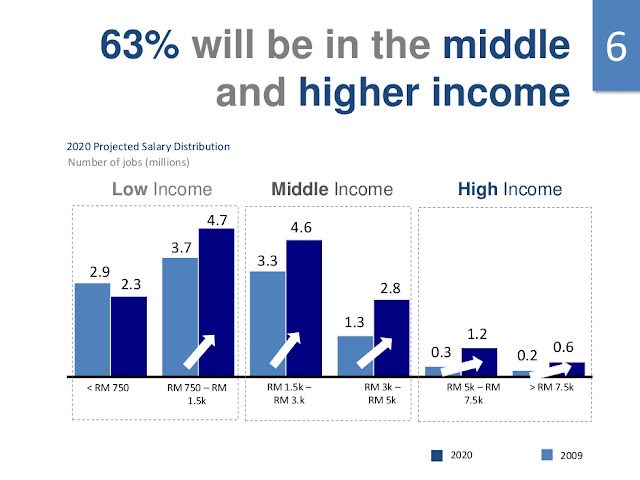 And, according to the above figures the number of Malaysians earning less less than RM750 would have declined over the 2009 to 2020 period, which tallies with Bank Negara estimates presented by The Star, where the minimum basic pay for PMR holders was RM892 in 2018, up from RM622 in 2010, and above RM750.

However, the minimum salaries of middle income earners with diploma, basic degree, honours degree and masters degree - i.e. those earning between RM1,500 and RM3,000 per month have decline between 2010 and 2018.

The Star's article referred to follows below.

by yimie yong and clarissa chung

PETALING JAYA: Degree holders are facing a double whammy as they stare at shrinking starting salaries coupled with a declining demand for high-skilled jobs.

Bank Negara, in its Annual Report 2018, revealed that real monthly salaries for fresh graduates holding a diploma or degree have dipped since 2010.

Those with a Master's degree saw an even greater decline in their starting pay.

The report, however, noted that the minimum wage has supported increases in the salaries of lower-skilled workers in recent years.

It showed that the real starting salaries of PMR and SPM-educated employees have risen by 4.6% and 2.3% respectively.

Such data is a cause for concern among young graduates.

The cost of education keeps rising but the starting salaries of those with a diploma or tertiary qualification have not kept pace.

Even as the starting salaries of degree holders are diminishing in real amount, the study found that the rate of people being hired in high-skilled jobs is also declining.

The report showed that the number of diploma and degree holders entering the job market increased by 173,457 people per year (from 2010-2017) on average.

However, in the same time period, net employment gains in high-skilled jobs stand at only about 98,514 people on average per annum.

"This suggests that the economy has not created sufficient high-skilled jobs to absorb the number of graduates entering the labour force.

"In addition, a study by Khazanah Research Institute also found that 95% of young workers in unskilled jobs and 50% of those in low-skilled manual jobs are over-qualified for these occupations," said Bank Negara in its report.

Wages are forecast to rise by around 6% this year in Malaysia and the growth rate is below the long-term trend.

Bank Negara also found that Malaysian workers are paid less than workers from developed countries when benchmarked for the same level of productivity.

For each US$1,000 worth of output, a Malaysian worker is paid US$340 compared with US$510 in developed countries for the same amount of output.

"Further analysis reveals that most industries in Malaysia compensate workers less than those in the benchmark economies, even after adjusting for productivity.

"This is particularly evident in the wholesale and retail trade, food and beverage and accommodation industries that make up 19% of economic activity and 27% of total employment in Malaysia. These industries are generally more labour-intensive, and dependent on low-skilled workers," said Bank Negara.

The dynamics of the labour market is also changing as the growing sharing economy, advent of technology and increasing demand for flexible working arrangements are transforming the intrinsic nature of Malaysia's labour market, said Bank Negara.

Economics professor Datuk Dr Amir Hussin Baharuddin said the decline in the starting salaries of degree holders could be attributed to the mismatch between degree holders and available jobs.

"Some of the degree holders have to go for lower-paying jobs, or else not have one.

"We have not created enough jobs for graduates to be choosy," he said.

Malaysian Trades Union Congress secretary-general J. Solomon said the report showed that Malaysian workers, except for senior executives, are still not being given their due.

"Wage levels are being artificially depressed by employers, and the government mechanism is too weak and unwilling to address this issue," he said.

He said there has been a growing wealth and income divide in the country, and this must be addressed by the private and public sectors.

He added that although employees with a PMR and SPM education have seen an increase in their starting salaries over the years, they were still below the minimum wage.